The Cat is Back 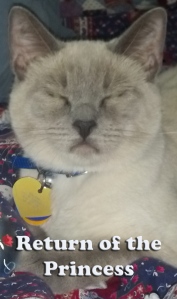 Sunday afternoon, The Girl went out for a walk and came home with a cat. Our cat. The one who’s been missing for several days. I was about ready to just call it, although I wouldn’t say that. It would upset the kids. Well, it would upset The Girl. Princess was chipped and had a collar and tags, so it was difficult to imagine nothing bad had happened without us being notified. We even checked to be sure animal control scanned cats when retrieved, in any condition, and called the owners if kitty was chipped. And we made sure they had our information on file.

Having a girl run in joyously declaring the good news at a pitch that made it impossible to understand her wasn’t how I saw this drama ending. Everyone’s happy again, yay! Even Darth Jingles stepped aside and let Princess eat and drink her fill, and didn’t hiss at her until several hours later. Yay?

Then Princess proceeded to tell us, as Siamese cats are prone to doing, all about her adventure. She meowed as if she were carrying on a conversation for over an hour. I’m not kidding. Sadly, by the time she’d finished, we still didn’t know what happened. Hubby has a theory she got trapped in the garage for someone who took a couple days off work and went camping. Then she got out when they came home. It’s the right time of year and there are a lot of RVs parked behind fences around here so it makes sense. We’re going to go with that. The Boy’s “a fox got her” theory clearly didn’t hold up. Although he was quick to point out she’s got a lot more fur than other cats we’ve had (not long, just thick), and that fox would be coughing up a hairball, so maybe the fox passed on the ordeal.

What happened doesn’t really matter, it’s that she’s back that counts. Princess was very snuggly the rest of the day and almost constantly underfoot. When bedtime rolled around, she crashed on Hubby’s briefcase – her traditional spot. Then, at three am, I woke to a cat fight in the dining room. Everything is back to normal.

Filed under Everything Else

Princess is MIA. Jingles is Suspect. 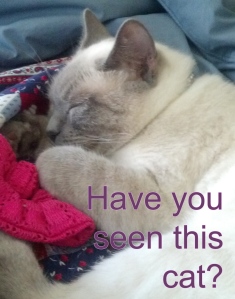 It’s been a crazy week, so just a quick note: Princess is MIA.

Sigh. Darth Jingles knows the rules about staying out after dark, yet she does it anyway. She’s a little black cat, pretty small really. She’s not a hunter, at least she doesn’t bring any “gifts” home. Okay, once, and to be honest it probably wasn’t greeted with the enthusiasm she probably felt it deserved.

In contrast, Princess is noticeably bigger and quite a bit heavier than Jingles. She is definitely a hunter, and clearly a survivor because she managed as a stray before adopting the cushy house-cat lifestyle. Oddly, she didn’t venture out much. Only about a half an hour at a time and didn’t leave the yard.

I think I’ve mentioned the cats don’t get along. They bait each other. I’m sort of wondering about this. First Jingles decides to stay out all night, again. She’s developing a bad habit. We know several times she’s been caught in the neighbor’s garage because we heard her meows when we call her. There may be another garage she frequently spends the night in, we’re not sure.

That this little featherweight can survive through the night might have sent a message to Princess that night was playtime outside. This clearly overrides our efforts to get them both in starting around dinner time. Princess didn’t grow up being told she was going to be eaten by the neighborhood fox, although I’ve tried to get her caught up on the rumors.

So Princess didn’t come home last night. Or the night before. Everyone in the cul de sac knows we have a new Siamese, and she has a collar that is eerily similar to Darth Jingles’ with bells and tags and everything.

The Girl made rounds yesterday and no one had seen her. We tried to rouse The Boy to ride his bike around, but he was busy having his days and nights reversed and we couldn’t get him awake enough. Hubby went to the store yesterday and (morbidly) took the side streets and looked for evidence of a mishap. Nothing. I called her this morning. Nothing.

Jingles looks more smug than alarmed. That makes me suspicious.

Filed under Everything Else 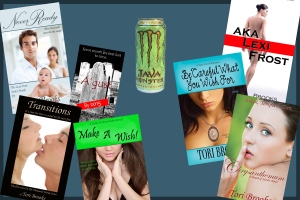 This week in writing . . . I haven’t done much. A little here and there on the fourth book in The Thousand Words Series, and a bit of revision on A’gust because I really need to work on that even more than Dev’s story. The problem with A’gust is that I know how to fix it, it’s just daunting. I need to just put on my big girl panties and do it, but I’ll take any distraction as an excuse and I have been for years.

Now my distraction is three books are coming up for quarterly renewal on Amazon (for exclusivity), so it’s the perfect time to list them on Smashwords and make them available in other formats. Do I have to do it now? No. There are perks to exclusivity with Amazon and I’ve put it off before. It’s not really fair to limit myself to people with a Kindle. I personally format my books to ePub for friends because I’m not available in the Barnes & Noble store. How pathetic is that? Or nice. Yeah, I’m super nice.

I’m still fiddling with final details of launching Transitions, so I reasonably could put off the Smashwords thing again. And I had a lot of other things going on that I’m not going to go into that just wore me out. (I’ve slept almost three days straight and I’m unbelievable sore, but I’m able to type again.) Honestly, I wasn’t sure I was going to be able to launch Transitions before the end of Never Ready’s promotional time, but I think I’ll be okay. I’ve grown terribly fond of Monster’s Irish Cream Java energy drinks.

With that confession, I’m making the decision to play Wonder Woman. I will have the promo on Never Ready go ahead as planned (July 14 through 18th) and I will release Transitions before that promotion ends. The eBook version, not the print version. That will have to wait.

I will release the print version of Never Ready by the end of the month. After all, I’m just waiting to get the proof on that so I can look it over, it should be fine. (I think I just cursed myself on that.) And I’ll get to Transitions next month.

I will reformat Be Careful What You Wish For, Chrysanthemum, and AKA Lexi Frost for Smashwords. And I will research the pricing tiers and lower their prices, so yay! By doing that on Smashwords, Amazon has to match the price, so . . . you know. There are repercussions. I have enough books published on Amazon now that it should be fine. I’ll look into that. (Adds to growing list of things to do in July.)

Then I’ll breathe a sigh of relief and I will get Make A Wish! released. After that’s done, I have no excuses. I’ve put off dealing with A’gust long enough. Years. See? I’m a world-class procrastinator when I want to be. By putting this down in writing, I’m making a commitment. And The Internet Is Eternal. (Imagine that was in some ethereal, disembodied voice floating over your shoulder.)

Why Smashwords? Because they distribute to Apple iBooks, Barnes and Noble, Kobo, and Sony, among others. And they handle all the major formats if someone wants to go directly to them instead of individual stores. Yes, you can download Mobi (Kindle format) there instead of going to Amazon if you want to. This is going to really mess up tracking. And I’ll have to change the links on my website. Hmm. More things to add to my list. Just peachy.

Summer must really suck if you’re a black cat. Temperatures creep upward, but you’re still stuck in a fur coat that soaks up the sun. Darth Jingles usually enjoys her outdoor adventures, not coming home until well after dark. (Tales of the local cat-eating foxes don’t scare her!) When the weather started getting warmer, our delicate little sweetheart decided coming home around lunch time was fine. Air conditioning is where it’s at.

Then we got Princess, and Jingles didn’t want to play inside anymore. First, we had the nerve to bring another cat into her domain. Plus Princess wore a cone for over a week, which just freaked Jingles out. Now that the cone is gone, they’re back to hissing at each other and making the kids break up cat fights. Luckily, Jingles has taken to sleeping with her boy every night now, behind a closed door. That doesn’t mean there’s less drama.

The other night, Hubby and I were rudely awakened by shattering glass at about three in the morning. The Boy was up playing video games, which is a rant for another time, so he was the first on the scene. The previously mentioned teen who’s in a lot of trouble by this point left his midnight snack leftovers on the kitchen table and Princess decided to help herself to leftover pepperoni pizza. That cat will eat anything.

Fine, we cleaned it up, sent The Boy to bed, took the cat with us, and drama over. No. Princess has taken to cornering Jingles under our bed. Why? The obvious answer is ‘why not?’ but I don’t think that’s it. Jingles has a basket in my bedroom window that she likes to snuggle up in and stare outside. Princess didn’t take any interest in the basket until a couple of days ago, when she suddenly decided that’s where she wanted to nap.

Not to be out-annoyed, Jingles took up residence on top of Hubby’s brief case, lying on a chest at the foot of the bed, where Princess sleeps nearly every night. Princess started this territorial nonsense, but didn’t care for Jingles one-upping her. That’s when the cornering under the bed started.

Have you ever heard a cat fight under your bed? How about at four am? Am I painting a picture of the complete lack of peace and quiet that is my house right now?

The Boy is forbidden from sneaking downstairs in the wee hours of the morning to play video games with his friends (who also have no concept of time of day) because it almost always releases Jingles into the general population. Jingles doesn’t pick the fights as near as we can tell, but she’s not very good about avoiding them either. It’s like she makes a rude-kitty-gesture then runs for it, leaving Princess to get scolded for chasing her.

Princess is still learning the rules, and she’s being given a lot of leeway simply because she’s a pretty cat, and she thinks she’s a dog. I love neurotic in my animals. I’m serious. She begs, she walks on a leash better than Jingles – who we trained to since she was a kitten, she plays fetch – and brings back the ball! Both cats love straws, but Jingles loses interest once the paper wrapper is gone, and only carries them by the end. Princess doesn’t care about the paper, she just likes carrying a straw around in her mouth – from the middle, like a bone. No reports of her burying them in the litter-box yet. She’ll get there.

Both cats are two years old, essentially teenagers in kitty-years. Except I already have two human teenagers. Now I also have two feline teenagers. Four teens . . . it feels like more somehow. I’m starting to feel like I belong in one of my own books.